Voter Registration: The Baltimore City League wanted to prioritize high school voter registration and voting this year. A grant from the LWV Education Fund (LWVEF) has provided an additional incentive. To help us identify schools that might be underserved in voter registration, we contacted League member, Julia Baez, Executive Director of Baltimore’s Promise (a collaborative for youth programs). She helped us work with the Baltimore City Public Schools Office of Family and Community Engagement which put us in contact with Community School Coordinators in five high schools—Ben Franklin, Patterson, Frederick Douglass, Reginal Lewis, and Western. We will also return to Baltimore City Community College (BCCC) where we have been registering voters around National Voter Registration Day.

On one Tuesday per month, January through May, we will either register voters during the lunch periods or provide voter education or election information. We are having registered students sign pledges to vote on self-addressed postcards with information about Vote411 and election dates. These will be mailed close to the primary election early voting. In spite of many schedule changes due to weather and mid-term exams, 12 volunteers registered 84 students in January. Argentine Craig is the project director. Flo Valentine, Co-President, is coordinating jthe volunteers. 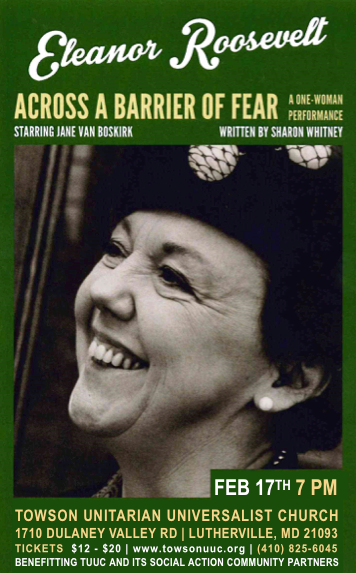 “Eleanor Roosevelt: Across a Barrier of Fear”: This Is a one-women show starring Jane Van Boskirk which was performed at Towson Unitarian Universalist Church, on Saturday, February 17, at 7 pm. The church sponsored the event to raise money for social action projects, but reached out to the League and other organizations to promote ticket sales in exchange for part of the proceeds, an ad in the program booklet, and an information table at the event. The Baltimore County League also advertised the performance. We thought it would be of special interest to League members because of Eleanor Roosevelt’s activism.