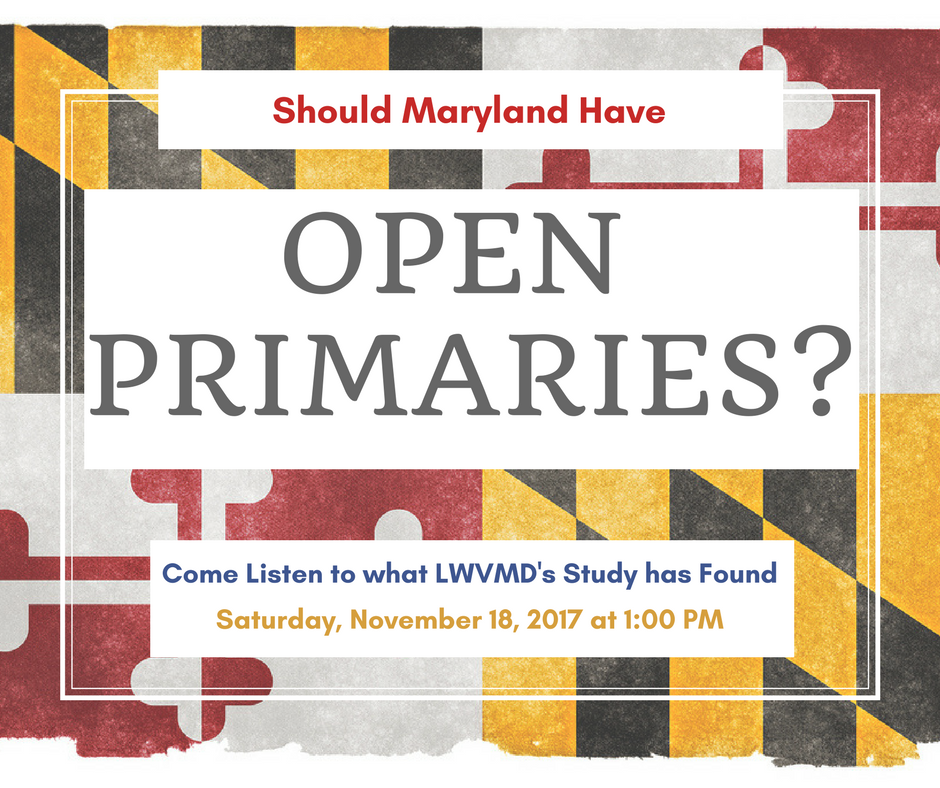 Is the current system of closed primaries the best way to serve the voters?  What are the alternatives?  A committee of the League of Women Voters of Maryland has been studying these questions for two years and their findings will be presented, along with questions for discussion.  Join this exploration of the the future of elections of Maryland!

What’s important to you about primary elections?

Some people say their vote doesn’t make a difference, so why bother to vote? Others really want a chance to vote on candidates, but our closed party primaries keep them from
participating. Are Maryland’s primary elections ripe for changes to address some of these issues?
• Could the ballot have a broader range of candidates… ones that reflect the interests of more communities…and encourage candidates to be more civil, focusing on issues rather than personalities?
• Is there a way to encourage more registered voters to participate – whether they are members of the major parties.. the minor parties …or those who chose to remain unaffiliated?
• Could any procedural changes result in better representation of our diverse population both for the choice of candidates on the ballot and among those elected…whether by gender, race, ethnicity, economic status?
• Might a change result in a wider breadth of policy opinions among those elected...could it affect party control over the legislative agenda… or might it increase the possibility of bipartisanship …could it result in a greater turnover from election to election?
Click here for the fact sheet and background.
WHEN
November 18, 2017 at 1:00pm - 4pm
WHERE
Talbot County Public Library
100 W Dover St
Easton, MD 21601
United States
Google map and directions
CONTACT
Ralph Watkins
Voter Services 2022 Legislative Priorities Join Us