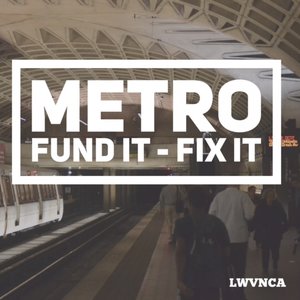 In the fall of 2016, the Board of the League of Women Voters of the National Capital Area voted to actively engage in the pursuit of a dedicated funding source for Metro. This interleague organization was founded in the 1960’s and one of their initial priorities was to advocate for a regional public rapid rail system. Its member Leagues include the state Leagues of Maryland, Virginia and the District of Columbia and eight local Leagues that surround DC. The original name of LWVNCA was “the Metro League Council”. A 1965 transportation study by this League documents that in 1963, members of the Metro League Council testified before Congress in favor of a $793 million rapid rail system with a total length of 83 miles, 19 of them underground. This ambitious plan was rejected, but negotiations continued over the next decade.

By 1974, due to inflation, the cost of building the system had risen to $4.5 billion. None-the-less, with many a hic-cup along the way, a plan to pay for the initial construction of the system was finally in place. On March 27, 1976 the first phase of Metro opened.

By 1980 the Interleague Organization was named the League of Women Voters of the National Capital Area. A study they produced highlighted the fact that while funds had been secured to build the system there was not a reliable, dedicated source to pay for operations, upkeep and improvements. In 1979, Douglas Feaver, a senior federal transportation official stated, “If you wanted to design an organizational structure that was guaranteed to fail, you would design Metro…The wonder of it all is that it has held together this long.”

Fast forward to 2018. Metro was experiencing issues of reliability, safety, and reduced ridership. Studies done by the Council of Governments, Ray LaHood, former federal Transportation Secretary, and Paul Weidefeld, WMATA General manager, all agreed that an additional $500 million annual increase of dedicated, bondable funding, was necessary to keep this vital transportation system from further decline and get it back to safe and efficient operation.

Edith Holmes, LWV Falls Church and Nancy Soreng, LWVMD agreed to co-chair an action committee to explore opportunities for advocacy for Metro funding. Following a successful forum co-sponsored by LWVNCA and the Coalition for Smarter Growth in the fall of 2017, advocacy began on a region-specific basis. Thanks to the hard work of League members in Virginia in conjunction with other members of the Fund It/Fix it Coalition lead by the Coalition for Smarter Growth and Metro Now, a coalition of major business players, the state of Virginia committed to an additional annual contribution of $154 million. Maryland League members also collaborated with these coalition partners and the state of Maryland set aside an additional annual dedicated contribution of $167 million. The District of Columbia passed emergency legislation the week of April 9 that committed to providing their full share of $178.5 million.

All involved are thrilled that the campaign turned out to be so successful and LWVNCA, whose roots are linked to the Metro system, was able to play a part.