The League of Women Voters of the National Capital Area (LWVNCA) is made up of the state Leagues of Virginia and Maryland, the League of Women Voters of the District of Columbia, the local Maryland Leagues of Frederick, Howard, Montgomery, and Prince George’s; and the local Virginia Leagues of Arlington, Fairfax, Loudoun, and Falls Church. In the Fall of 2016 the LWVNCA Board voted to adopt Metro Funding as an advocacy priority... 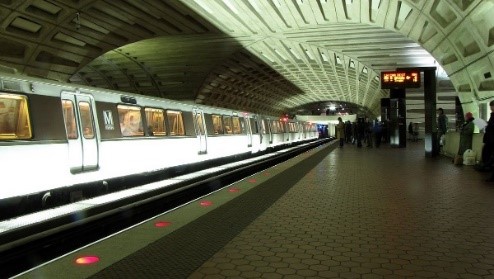 ...and they appointed Edith Holmes Snyder from Virginia and I to co-chair an Action Committee.

We began to research whether any other organizations were working on this issue and discovered that the Coalition for Smarter Growth (CSG) was convening a coalition called Fund It/Fix It. This coalition is focusing on grass roots advocacy to call for a dedicated, bondable and sustainable funding source for Metro. Metro is about $500 million short of what it needs to operate on an annual basis if the various jurisdictions continue to make the same payments to the system that they have been making. A wealth of information on the topic, along with the presentations given at the Metro Funding Forum that was hosted by LWVNCA and CSG, can be found on the LWVNCA Fund It/Fix It site.

If there is no more money, there will either be fare increases or a reduction in service. Either action could head Metro into a “death spiral.” So, there is an urgent need to get more funding for Metro, but no one agrees on how that should happen.

Several proposals are floating around including a regional sales tax, increased property tax on property near Metro Stations, or creating a dedicated fund within the states’ transportation trust funds – but none of these options are particularly appealing to any of the involved jurisdictions. On November 7, we met with Ray LaHood, former federal transportation secretary, who was hired by Governor McAuliffe to produce a report on the topic. This report has not been released but he shared some of his key findings. He believes that each jurisdiction will have to come up with their own funding plan. Also, the federal government should be contributing more. An analysis of labor costs showed that what Metro pays is in line with other systems in the nation. A smaller governing Board should be put in place temporarily to streamline decision making.

We will be meeting with Maryland legislators to learn about their perspectives on the topic and remind them that a well-functioning Metro system provides significant economic, environmental and quality of life benefits to the entire state. If opportunities for advocacy by our members arise, we will let you know via Action Alerts and further articles in League publications.