Posted by Richard Willson 1518vtl on

Join us on a tour of the Lucy Burns Museum 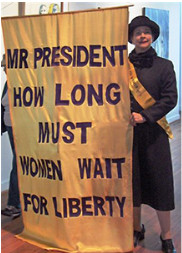 We have arranged a visit for League members, friends and family to the Lucy Burns Museum in Lorton, Virginia on October 19th.

This is where, in 1917, women who were protesting Woodrow Wilson’s failure to support votes for women were imprisoned.

You can board a bus chartered by LWVMD at either:

for our day-trip to the museum.

At 12:30 p.m. the bus will drop us off at Madigan's Restaurant in Occoquan, VA for lunch on our own.

***Scroll to the bottom to purchase tickets online - Select the ticket for your preferred pickup location - Member Tickets are $65 & Guest Tickets are $75.

More About the History

The District of Columbia’s Workhouse opened in Lorton, Virginia in the summer of 1910. It was an experiment to see if hard work in an open air environment would be an effective deterrent for short term prisoners who were habitual drunkards, vagrants and family abusers. A 3,200 acre tract of undeveloped land on the Occoquan River near Lorton, Virginia was purchased by the U.S. Government for the establishment of an “industrial farm”. There prisoners built the stockade and tents in which they were housed using lumber obtained from the site. There were no cells, locks or bars. A brickyard was established, fields were prepared for cultivation, orchards created, a wharf built on the river and a road cut through to a nearby railroad. Eventually the prisoners built the brick dormitory buildings still seen today of bricks they, themselves, had made.

A Women’s Workhouse was opened in 1912 on a nearby site. Sentences were of short duration and were for soliciting, prostitution, disorderly conduct and drunkenness. Women did laundry and made clothes for the prisoners of the two institutions. Some worked on the lawn and in the garden.

In 1917, women began demonstrating in front of the White House for the right to vote. They decided they would rather be imprisoned than be quiet. In response to their outspoken protests during World War I, they were sentenced to fines or imprisonment. They chose imprisonment. Some of those arrested were sentenced to the Women’s Workhouse at Lorton. The protesters were held under deplorable conditions. As news of the sentences spread, sympathy for the suffragists was aroused. Even the most hardhearted did not believe that pickets deserved such drastic sentences. After the pickets were released a number of women who had been arrested and served sentences toured the country on the “Prison Special” railroad car to keep public attention focused on the suffrage issue in the Senate.

President Woodrow Wilson reacted to the growing public outrage and finally advised Congress to pass the Susan B. Anthony Amendment.  In June 1919 the Congress submitted the 19th Amendment to the states for ratification. By August 1920, 35 states had ratified the amendment.  Tennessee became the necessary 36th state to ratify on August 26, 1920.  For the first time in November 1920 women were allowed to vote in the national election.

Out of this movement, the League of Women Voters born. We are engaging in a year long commemoration and celebration of this accomplishment, all of the work the League has done to empower voters and defend democracy, and all of the work we are going to do.

Registration is Open through October 17th - or until Seats Sell Out!