Gerrymander Meander 2: What were they th(dr)inking when they drew these lines? Crowds rally for redistricting reform

Timonium – Scores of people came out Sunday for a unique protest against gerrymandering in Maryland. The event, the “Gerrymander Meander 2,” visited four different restaurants in Baltimore County. Although the entire route was just 13 miles long from south to north, each stop was located in a different Congressional district – and participants who visited every stop actually crossed district lines seven times. 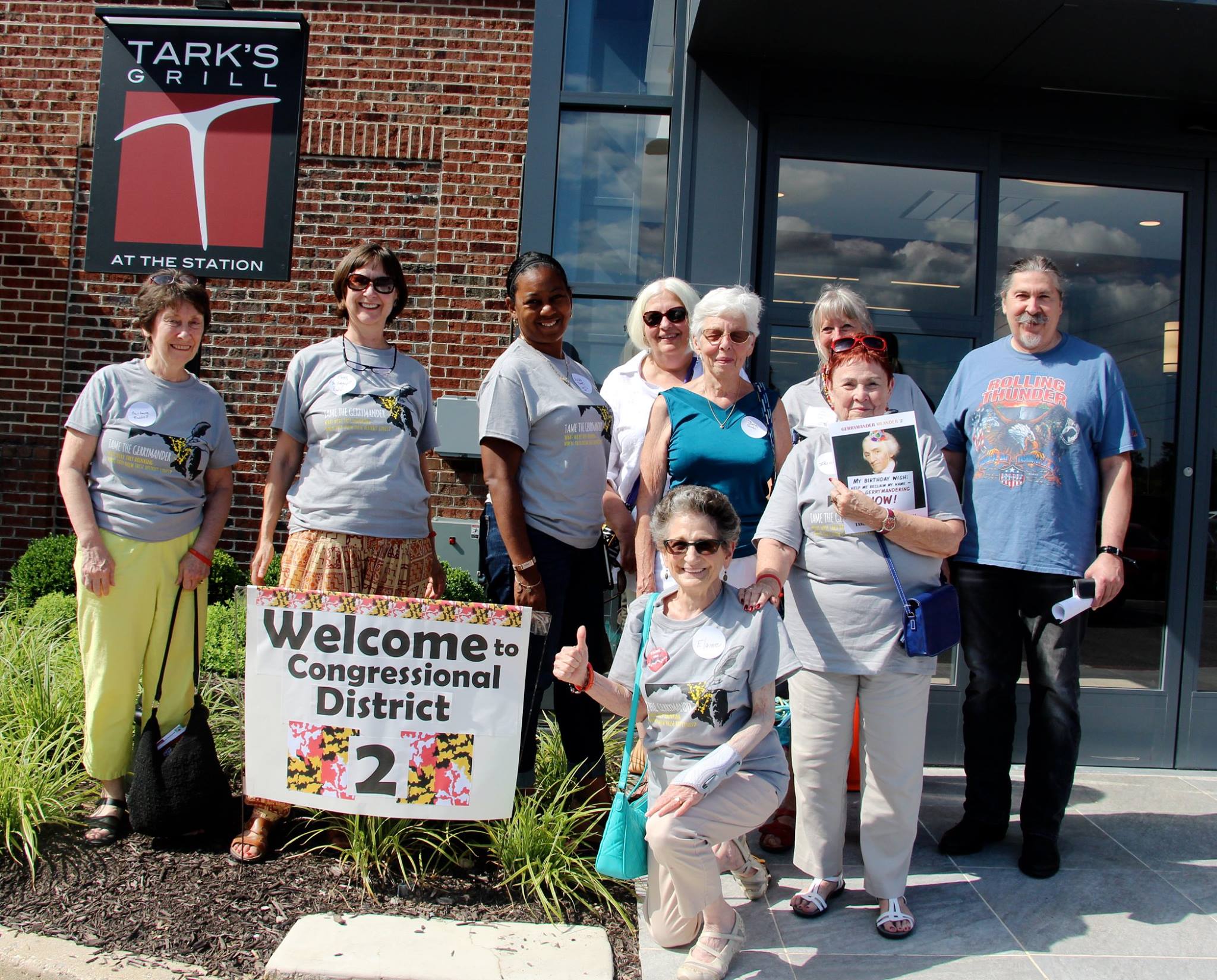 “Three years ago, full of energy and optimism, the Tame the Gerrymander Coalition hosted the Gerrymander Meander: a relay-run around District 3, highlighting one of Maryland’s particularly strange districts,” explained Jennifer Bevan-Dangel, executive director of Common Cause Maryland. “Today’s event enabled us to experience our gerrymander in a different way by showing how contorted our districts are, slicing their way across our counties and through our neighborhoods.”

The event also commemorated the birthday of Elbridge Gerry, the namesake of the gerrymander.  Each stop had food specials, contests and guest speakers on redistricting reform.

Lieutenant Governor Rutherford spoke at the first event. “Our districts are so carved up that they are denying people a voice in the process,” he said. “It is time to stop. Other states have taken action – what are we waiting for?”

Other guest speakers included Senator Jim Brochin (D-42) and Walter Olson, co-chair of the Governor’s Commission on Redistricting Reform. “Maryland is an example of a problem the whole country is going to have to deal with,” said Mr. Olson.

Members of the Tame the Gerrymander coalition urged the attendees at each stop to get engaged.

“This meander might only cover 13 miles,” said Ashley Oleson, Administrative Director of the League of Women Voters of Maryland, “but we are in the final stretch of a marathon. For the past three years we have been building momentum for redistricting reform. Now we have to carry this fight over the finish line.”

The event route started at Le Bistro du Village in Baltimore City, then went to Tark’s Grill in Timonium before visiting Roma’s Café in Cockeysville and ending at The Greene Turtle in Hunt Valley. Between 35 and 45 people joined at each location. Attendees hailed from across the state, including Frederick, Baltimore County and City, Harford, Cecil, Howard, Montgomery, Anne Arundel, and Prince George’s.  There were participants from nearly every Congressional district in attendance.

Organizers expressed their excitement with the turnout for the event. “Clearly, this is an issue that resonates with Marylanders. We can only hope that our elected officials are paying attention,” said Lu Pierson, one of the attendees.

The Tame the Gerrymander coalition will now focus on policy forums scheduled for the fall as they prepare for the 2018 legislative session.

Pictures of the event can be found online here

Tame the Gerrymander is a joint effort led by the League of Women Voters of Maryland, Common Cause Maryland, No Labels Maryland, and No More Gerrymandering in Maryland.