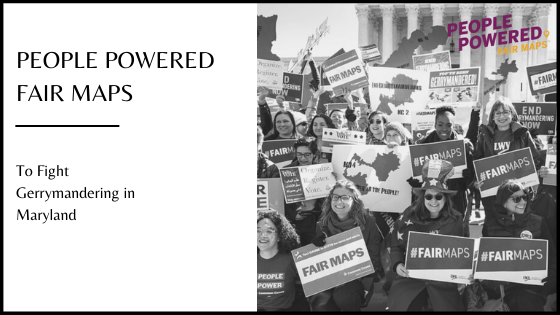 There is a real urgency in Maryland to persuade our legislators to pass meaningful reform for our redistricting process during the 2020 session.

Since REAL REFORM can only be achieved through a constitutional amendment we have to get redistricting reform on the ballot in 2020, before the next redistricting process starts in 2021.

A constitutional amendment MUST be voted on by the PEOPLE, meaning that the Maryland General Assembly has to pass legislation THIS NEXT session to get reform in motion that will make a difference when the next census triggers the redistricting process.

The 2020 census data is what informs the process of redistricting for the subsequent DECADE.

If nothing changes, we'll be stuck with the same old broken redistricting process we've had in Maryland for the previous 10 years!

This is the process that has given us a district that's been compared to blood spatter and a broken-winged pterodactyl.

And let's not forget how the state's legislative districts were drawn, with wandering fingers, and community slicing lines.

To ensure that we get a FAIR districting process in the next cycle, we have to act NOW.

LWVMD with partners in 50 states is fighting for People Powered Fair Maps for the next decade.

Can you help? Let's see if we can MATCH the grant from LWVUS to support our Advocacy Efforts!

Research shows that 73 percent of Marylanders support having an independent commission draw district lines - that's 4,438,109 people! We can do this!